Beginning in 1938 with Superman as the protagonist of Action Comics #1, written by Jerry Siegel and illustrated by Joe Schuster, superheroes have made tremendous cultural impact throughout decades of American history serving as progressive role models and paramount examples of mentorship, protection, positive self-esteem and empowerment for society and the individual alike. Characters such as Superman, Captain America, Wonder Woman, Batman, Spiderman, Thor and many others have not only gained global adulation through the massive popularity of Marvel and DC Comics, but have weathered wars, social injustice and political unrest while continuing to prevail as constant societal ideals. 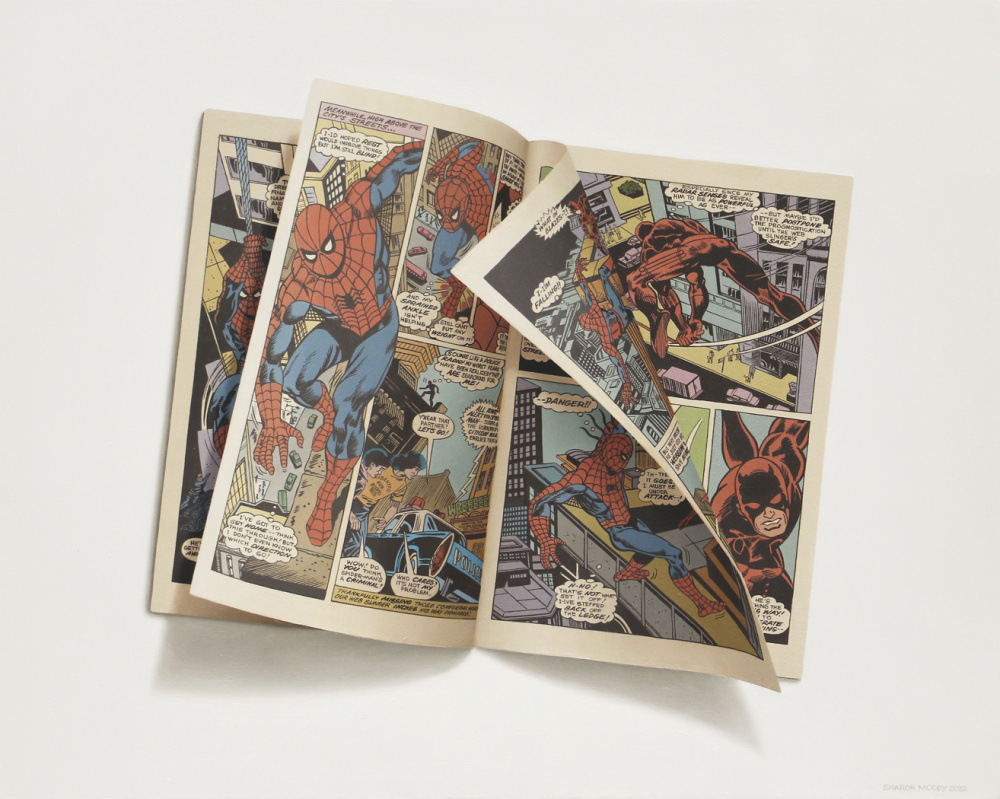 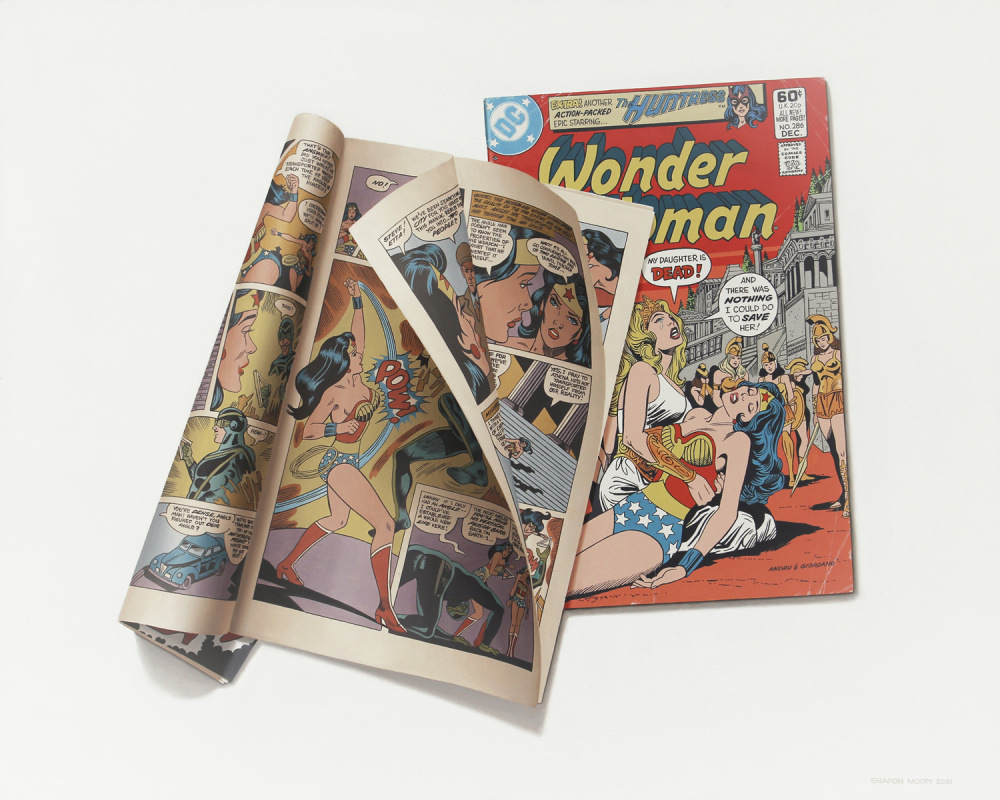 With a nearly ironic lack of enthusiasm for the computer-generated graphics that fuel the current iteration of superhero fervor, Sharon Moody paints selected pages of vintage comic books in a photorealistic, trompe l’oeil, “fool the eye” style. Executed almost to the scale of an actual comic book, each of Moody’s oil on panel paintings seems to vividly pop off the painted surface while offering astute commentary on American culture, mass produced consumer products and media entertainment as a favorite cultural pastime. 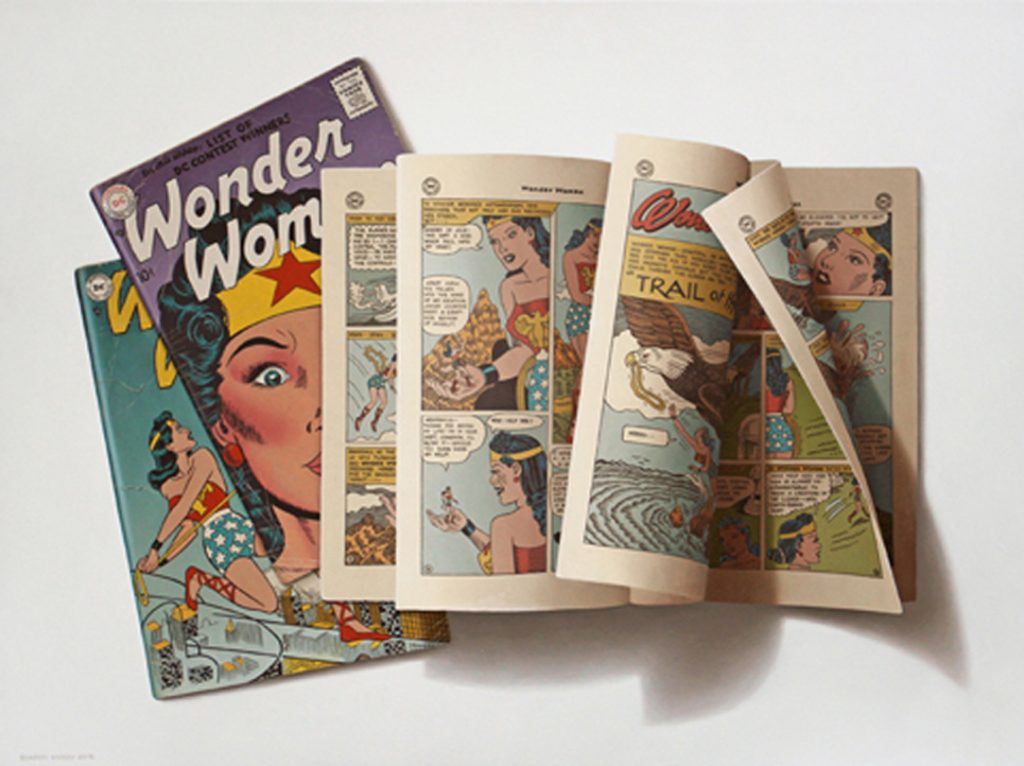 Titles such as: Trail of the Golden Lasso, Wonder Woman, Vol. 1 No. 90, March 1957, ( reveal Moody’s affection for old fashioned comics as she not only paints but also documents passages from various volumes treasured in her own collection. Rendering each piece in painstaking, hyperrealist detail, the artist pays tribute to beloved comic book characters while astutely presenting a moment suspended in time. Each finely detailed work captures a beloved action figure in dynamic pose subtly revealing a fan’s devotion. The reader’s enthusiasm for the illustrated tomes is almost palpable in the way that Moody finely renders the slight wear and tear of gently worn pages bent back for casual reading; the treasured memories of adolescence, a collector’s lifetime attachment. 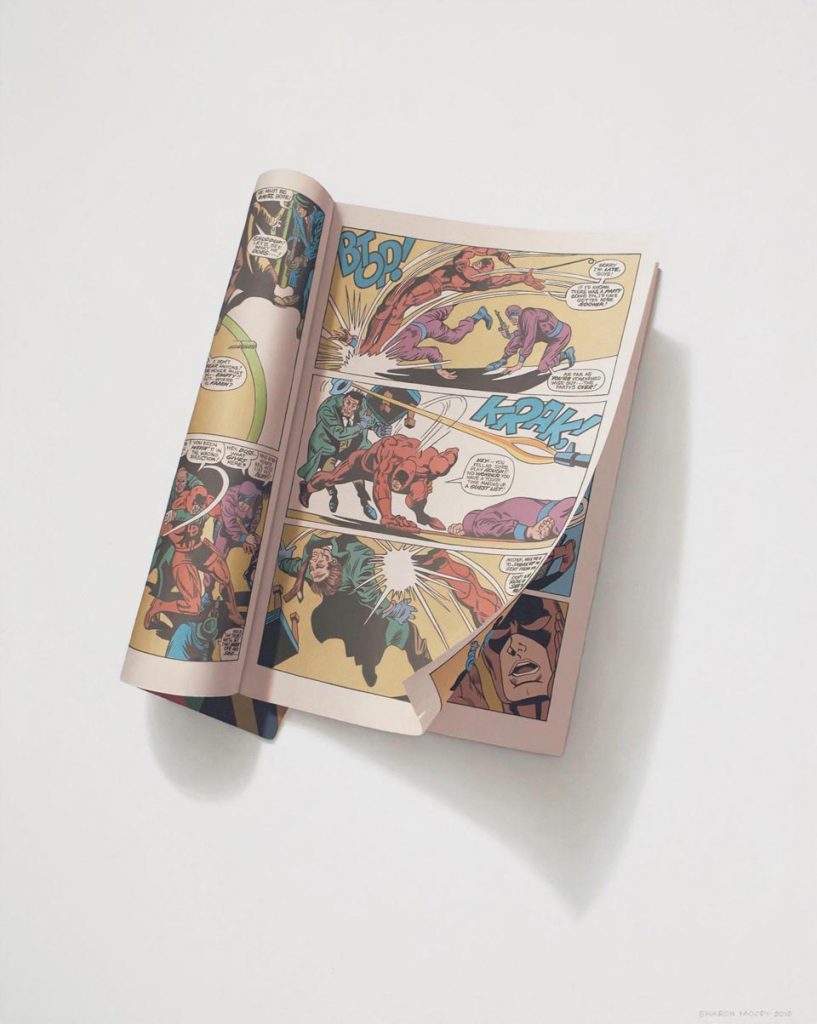 Sharon Moody’s work was recently included in museum surveys of contemporary realism, such as the Contemporary Realism Biennial at the Fort Wayne Museum in Texas, the traveling exhibition Photorealism Revisited, seen at the Butler Art Institute and the Oklahoma City Museum of Art and has been featured in Photorealism in the Digital Age (2013) by Louis Meisel, in the section titled “Promising Artists.” This is her first exhibition with Scott Richards and Tangent Contemporary Art in San Francisco. The artist has exhibited across the country and her work is held in many private and public collections including George Washington University, Washington, DC and the DC Commission on the Arts and Humanities Art Bank, among others. She currently teaches at Georgetown University, Washington DC.