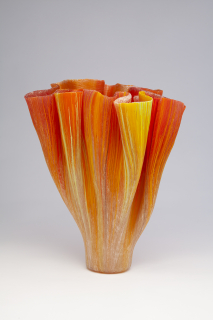 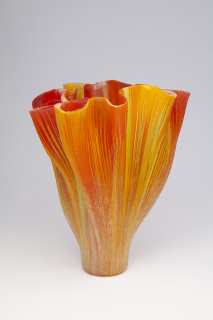 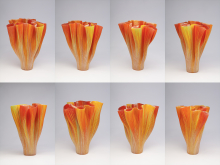 Toots Zynsky is an internationally recognized glass artist best known for her innovative sculptural “filet-de-verre” technique which fuses together glass threads to form vibrantly colored, organically shaped vessels.  The sculptor received her BFA from the Rhode Island School of Design in 1973.  She was the only woman in a group of pioneering artists studying with Dale Chihuly, who made studio glass a worldwide phenomenon. In conjunction with Chihuly, she participated in the founding of the renown Pilchuck Glass School in Washington State.

Zynsky’s works capture light, movement and the imagination and have earned her a special place in the history of glass. They are a part of 75 international museum collections including the Museum of Modern Art, the Metropolitan Museum of Art and the Cooper-Hewitt in New York City; the Musée des Arts Décoratifs du Louvre in Paris, the Stedelijk Museum in Amsterdam, the Victoria and Albert Museum in London and Australia’s National Gallery of Victoria.