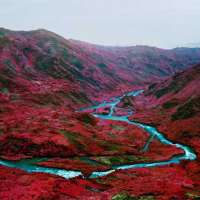 Richard Mosse is an Irish conceptual documentary photographer best known for his large format photographs of the war in the Democratic Republic of Congo. He is best known for Infra, a series of vividly colored, large-scale images of the lush rainforests in the Eastern Congo and the feuding inhabitants of this war torn region. By shooting with discontinued Kodak Aerochrome, an infrared surveillance film that renders greens into acid pinks and reds, Mosse offers a surreal vision of those profoundly impacted by the unspeakable horrors of warfare.

In 2013, Mosse represented Ireland in the Venice Biennale with the The Enclave an immersive six-channel video installation that utilized 16mm infrared film. The piece is an attempt, as Mosse explained on CNN.com, to bring “two counter-worlds into collision: art’s potential to represent narratives so painful that they exist beyond language, and photography’s capacity to document specific tragedies and communicate them to the world”.

Richard Mosse was born in Ireland. He holds a BA in English literature from King’s College London, a degree in cultural studies from the London Consortium in 2003, a postgraduate degree in fine art from Goldsmiths, University of London and a photography MFA from Yale School of Art. His solo exhibitions include: the Palazzo Strozzi, Florence; the Weatherspoon Art Museum, Greensboro; the Bass Museum of Art, Miami; the Künstlerhaus Bethanien, Berlin; the Centre Culturel Irlandais, Paris; the Dublin Contemporary Biennial; FotoMuseum Antwerp (FoMu); FOAM, Amsterdam; and the Tate Modern, London. Mosse’s work is part of many public collections including the The National Gallery of Victoria, Australia; The Portland Art Museum; The Colby College Museum of Art; Rollins College/Cornell Fine Arts Museum; Kemper Museum of Contemporary Art, Kansas City and the Martin Margulies Collection, Miami amongst others. Mosse’s first monograph, Infra, was published by Aperture Foundation and Pulitzer Center on Crisis Reporting in 2011. His most recent monograph, The Enclave, was also published by Aperture Foundation in 2013 to accompany his presentation at the Venice Biennale.